Free local delivery for orders above $99. Maddie on Things is a photobook with gorgeous images of Maddie balancing on all kinds of objects. These images were born from a year-long roadtrip project, This Wild Idea around the United States.

Maddie travels with best buddy Theron Humphrey who takes pictures of Maddie balancing with grace and poise on almost everything from giant watermelons, road signs, animals, bicycles to refrigerators.

Some are hilarious, some left us in awe and some are just adorable. So well-composed, all of them are just worth flipping over and over again.

Theron adopted Maddie from the animal shelter and instantly knew they were best pals. In 2011, they set off on the roadtrip project, an adventure of surprises and discovery. He discovered Maddie's talent of patient and balancing on things, how Maddie has changed his life for the better and the lessons dogs like Maddie has to teach.

Maddie is a Coonhound, a scent hound, originally bred as working dogs who hunt and search entirely by scent. They are generally even tempered, outgoing, friendly and sensitive.

Captures the imagination of a adventurous roadtrip in the good company of dogs, this photobook is a great gift for any dog-crazy self and friend.

Read also about another project, Why We Rescue as the pair embarks on another roadtrip through all 50 states in the United States. They visit families and people who adopted animals, telling their stories of these animals and how they have changed lives of the adopters for the better. This project shares everyday stories on how animals open the hearts and homes of people.

More about the project here.

How to measure your dog

Take 1 tape measure and 1 dog (and maybe some treats).

Take measurement round the base of neck, with 2 fingers slag (UC). Then choose the collar size to match the measurement.

(Do not measure old collar.)

Take measurement of the largest part of the chest (LC).

Then choose the gear that matches your measurements.

Choose the apparel that matches your measurements.

If you need further help in choosing the right size, please feel free to contact us woof [at] gingerandbear.com.sg We are confident you or your furry family member would be happy with our merchandise and service. We work hard to ensure the quality or the merchandise we present here. If for some reason you are not, we'd be happy for an exchange.

Merchandise should be in original packing and re-sellable condition, unused and undamaged.  Exchanges should be made within 14 days from date of delivery and please allow 14 days for processing exchanges. Customers are responsible for charges that arise due to exchanges (such as delivery / shipping). Faulty items due to production/manufacturing will either be replaced or refunded as appropriate to the circumstances. Email us at woof [at] gingerandbear.com.sg with the order number and relevant details.

We reserve the right to deny any exchanges that do not meet exchange policy.

Let customers speak for us

This Cloud7 leash is long enough for my pup to run and it’s comfortable for me to hold. The features of enabling me to sling round my shoulder or hook it around my waist are great when I am carrying things or picking poo. I can also hook it on a grilles when dinning out with my pup. It’s all the practical features I need in a dog leash and I simply love it’s cool colour. I also like it when it comes with matching collar and harness. Love this set of Cloud7 TIVOLI range.

This Cloud7 dog harness is stylish, elegant and classy looking. And on my dog, it’s simply gorgeous and beautiful. My dog loves to wear the harness compared to his old one which I believe it’s because this Cloud7 harness is very comfortable and light weight. It is also very strong and sturdy for my strong pulling hunting puppy. Material and workmanship are excellent. My puppy wore it into the sea and swam in it. It’s just so perfect! Thank you Ginger & Bear for bringing this harness into our local market. 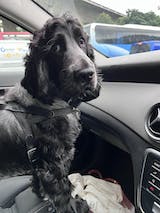 My dog loves it when I put this raincoat on her. I think she knows she looks very good in it. Of course there is also the important factor of protection from rain. She doesn't like the rain, not one bit. It's an excellent design with thoughtful details like the elastic straps that keep the back part of the raincoat secure and the cute two-colour collar that can be folded down when the rain is less heavy. She measures 22 inches around her chest and wears size S.

Quality product, delivered quickly, sensibly priced and packaged with a personal touch. Ginger and Bear is now on our list of preferred suppliers for our dog’s needs. Thank you G&B!